Why is there a Zofran Lawsuit

Birth defects, like cleft lip and cleft palate, atrial septal defect (hole in the heart) and ventricular septal defect (hole in the heart) and a potentially fatal heart arrhythmia known as torsades de pointes may be linked to the prescription drug ondansetron hydrochloride, known by the brand name Zofran. There is reason to believe the manufacturer of Zofran, Glaxo-Smith-Kline, one of the largest multi-national pharmaceutical companies in the world, knew of the risks, but failed to properly inform the FDA and healthcare providers. While medical professionals and attorneys debate this issue, Zofran continues to be prescribed, and growing evidence suggests that the drug required additional testing and research before it should have been widely marketed and prescribed to patients who had better treatment options.

Zofran is a serotonin 5-HT3 receptor antagonist. Serotonin is a neurotransmitter produced in the brain that is found primarily in the lower gastrointestinal tract, where it plays a role in the movements of the intestines. When the 5-HT3 receptor is activated by a substance (such as alcohol), it can cause nausea and vomiting as well as anxiety, and in some cases, increase the likelihood of seizures.

Why is Zofran Prescribed 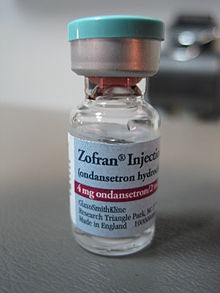 Zofran is normally given to cancer patients undergoing chemotherapy and radiation treatments in order to prevent nausea and vomiting. It has been aggressively promoted for the ‘off-label’ purpose of treating symptoms of morning sickness in pregnant women. Since the drug has been available in generic form, studies have indicated that it may be useful in treating psychiatric and psychological disorders.

GSK agreed to pay $3 billion in 2012 to settle numerous allegations including illegally marketing Zofran for non-approved use.

What are the Side Effects of Zofran

Commonly reported side effects of Zofran include headaches and dizziness as well as constipation. A few patients have reported damage to the inner ear as well, though these have not been confirmed. The medication has also been associated with a potentially fatal form of arrhythmia (irregular heartbeat), known as torsades de pointes. Patients should avoid operating machinery while taking Zofran, as it may impair cognitive function and reaction time.

A number of articles have been published in medical journals presenting evidence that suggests a link between the use of Zofran by pregnant women and birth defects. Although the issue is still being debated and studied, the general consensus among medical professionals is that Zofran should not be considered as a treatment for morning sickness unless all other treatments have failed. It has been established that Zofran can be transferred to the fetus through the placenta up to twelve weeks after conception.

The Food and Drug Administration (FDA) has issued warnings of the increased risk of heart problems and recommended ECG monitoring for patients suffering from an imbalance of electrolytes (electrically-charged minerals in the bloodstream). For more information, click Zofran Risk of Abnormal Heart Rhythms Safety Alert Medical Studies and Zofran.

There is little consensus in the medical community about whether or not Zofran causes birth defects at present. However, a January 2012 study from the Center for Birth Defects Research and Prevention indicates that women taking Zofran for nausea and vomiting during the first trimester of pregnancy were twice as likely to give birth to a child with a cleft lip or cleft palate. A more recent study published in Reproductive Toxicology presents possible links between the use of Zofran and specific birth defects that affect the heart as well.

How Long Do I Have to File a Zofran Lawsuit

While this case is in its early stages, patients are advised to seek legal counsel immediately. If you wait, you could permanently lose all of your rights, even if a settlement occurs in the future. This is because every State has time limitations in which you can file a lawsuit for any injuries that you have sustained or could sustain. This is known as the statute of limitations: every State has maximum time limitations on when an injury claim must be filed. If a claim is not filed against the manufacturer, sellers and healthcare providers before the statute of limitation expires, the injured persons are forever prevented from bringing a claim against the entities and persons who may be liable for their injuries.

If you have been potentially injured by the use of Zofran, please call us as soon as possible so that we can review your situation and determine whether or not your statute of limitations has expired. Every day you wait to retain an attorney may be the last day you can bring a claim.

Why Should I Select McNamara Law Firm, PLLC to Handle my Zofran Case

Our law firm has decades of litigation experience and is considered a top Tucson medical malpractice law firm. Defective drugs are a special focus of our practice. We have secured millions of dollars in settlements and judgments for our clients. In litigation such as this, a local Tucson law firm also offers you the value and comfort of personal service and attention.